Four panellists addressed themselves to some two hundred Brussels-based Cameroonian women, accompanied by Belgian friends, and a handful of men, in the presence of Ambassador Daniel Evina Abe’e and comrades, on Sunday 12th March in the Uccle neighbourhood of Brussels, Belgium. In respect of the 2017 theme for the International Movement for Women’s rights, namely, “Women in the Changing World of Work: Planet 50-50 by 2030, ” each highlighted an aspect craving the attention of the majority of women.

Dr. Edwige Abena, Epidemiologist, President of the Association for Equality and the Growth of Women (APEDEF) advised those who can to create their own enterprise. Closely linked to that, Madam Charlotte Latani, Social Worker at CPAS presented her organisation which is run from the top by women. Thereafter, Madame Fadimatou Ahmat, President of CAW in Leuven, Director of CINESAH Film Festival in Garoua, and President of the NGO Kaotal insisted that strategies must be implemented to keep girls in school beyond the primary level, especially in the North of Cameroon. Addressing herself to women at all levels and in all domains Madame Marie Pierre Nyatanyi, Specialist in Gender Development, holder of a degree in Political Science and International Law, and Writer stressed the importance of ICTS in women’s education and work.

The Head of Mission expressed satisfaction with the presentations, following the question and answer session. In addition, there was Balafon music from Minleng Simon and his group; a Solo and chéorography by Gigi Mone, an exhibition of Cameroonian fabric, clothes, tea, Penja pepper, food, among others. After dinner composed of Cameroonian cuisine, the dance floor was open to all.

The exhibition of Cameroon-Belgium cooperation hit a high note on Thursday the 2nd of March 2017 at the Cameroon Embassy when Head of Mission H.E. Daniel Evina Abe’e along with close collaborators held discussions with a combined delegation of medical personalities. The latter were made up of the Leuven University Medical Cooperation and Solidarity (LUMOS), on the one hand, and medical authorities of three Cameroon health institutions, namely Saint Martin de Porres Hospital, Njinikom; Saint Joseph Children’s and Adults Home and Medical Centre, Bafut; and Saint Elizabeth Catholic Hospital, the School for Nurses and Lab Technicians, and the Cardiac Centre in Shisong.

Thanks to ongoing cooperation between the two, launched way back in 2001, a lot has so far been accomplished. In addition to the yearly training of students in Belgium, specialists from Belgium travel to Cameroon yearly to work with local experts and staff on cases requiring special intervention. Besides, once or twice a year, members of LUMOS join hands and hearts to send containers to Cameroon. As of date, and as an example, up to 249 beds have been sent to the three hospitals.

Cameroon's Head of Mission in Brussels, Belgium assisted by his close collaborators, on Sunday the 26th of February 2017 attended the 40th anniversary of the Ridders Club, the ace Pigeon Racers Club of the Kingdom of Belgium. It was the utmost joy of Mr. Lionel Debusschere and his wife Nicole Mouqué together with the President of the Club to welcome the representative of the African country to which they have given help each year since 1977. The ceremony took place at Harebeke, a town situated more than a hundred kilometres in the Flanders.

Indeed, the couple, who have made enormous sacrifices relentlessly were decorated last 20th May by His Excellency Daniel Evina Abe'e as Knight of the National Order of Valour, follow recognition by the President Paul Biya.

It is thanks to their contribution that the yearly One million francs CFA, among other material gifts added up to the construction of College Chevreuil in Douala, Cameroon.

His Excellency Daniel Evina Abe'e on Friday the 20th of January 2017 wished staff and representaives of the Cameroonian community in Bruxelles, Belgium good health and a Prosperous New Year.

He was speaking in response to Mr. Laurent Tchandeu, Minister Counsellor, who on behalf of all present extended blessings of the year to him and his family.

In his address, Mr. Tchandue disclosed that some 3500 Cameroonians resident in Belgium and the surrounding countries made requests for Passports.

Also, more than double that number applied for Visas.

Then some more requested other documents and services from the Consular Department of the Embassy.

His Excellency Daniel Evina Abe’e on the 26th of November 2016 in Brussels officially welcome newly arrived Cameroonian students admitted into Universities in Belgium. A lot of the older students came to encourage the new ones, especially by sharing their own experiences. In all, 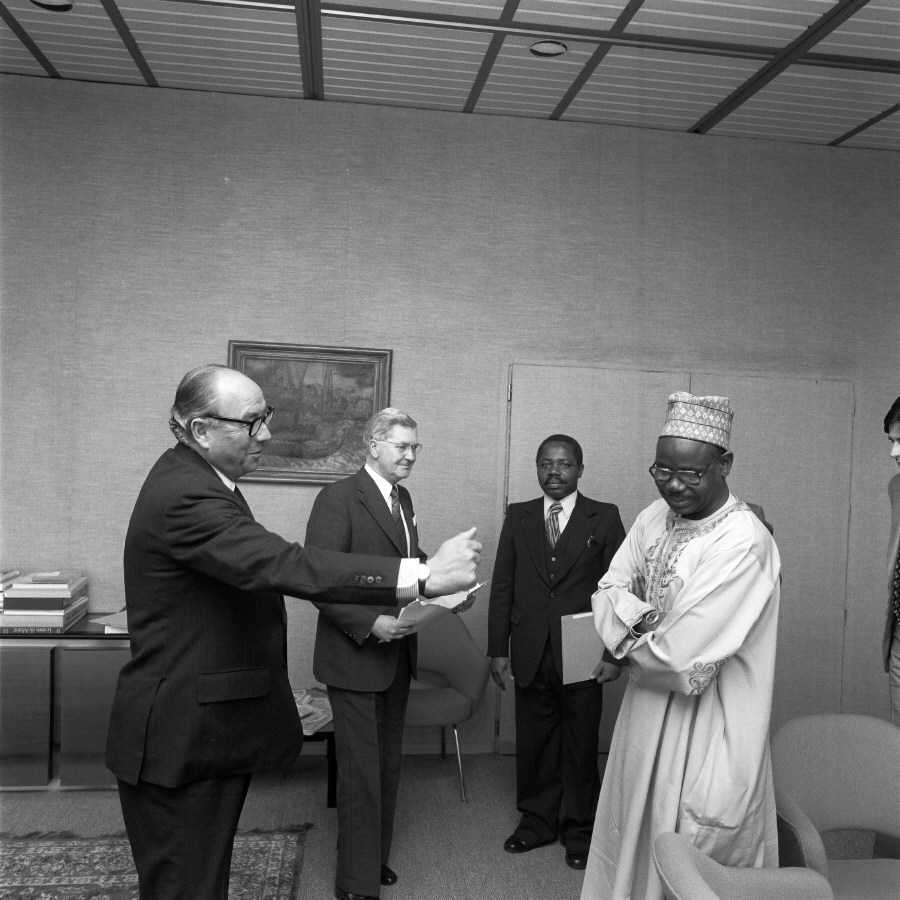