Decision-makers of the African, Caribbean and Pacific Group of States approved key policy and administrative actions for the organisation, while also taking a stand on major issues affecting ACP countries.

The 106th session of the ACP Council of Ministers was held on the 4th to 6th of December at the ACP headquarters in Brussels, chaired by the Minister of Trade, Industry, Informal Sector and SMEs of the Republic of Senegal H.E. Mr. Alioune Sarr. The Council of Ministers took 16 Decisions, passed five Resolutions and made one Declaration, including the approval of the Secretariat’s work programme and budget for 2018.

The Council of Ministers instructed the Committee of Ambassadors to take several steps in preparation for upcoming negotiations with the EU for a renewed ACP-EU partnership agreement. These include elaborating the core guiding principles for negotiation, engaging with regional and continental organisations to consider regional specificities, conducting a comprehensive analysis of the EU’s preferred scenario for post-Cotonou ACP-EU relations, and completing outstanding studies related to the negotiations.

Ministers also agreed to convene a special session of Council dedicated to Post-Cotonou negotiations on 27th May 2018, preceding the 107th meeting of the Council of Ministers to be held in Lomé, Togo.

The Council of Ministers passed a resolution strongly condemning the unilateral and discriminatory practices of the EU in publishing a list of “non-cooperative tax jurisdictions”, which includes eight ACP states, despite these countries being compliant or largely compliant with the standards set by the Organisation for Economic Cooperation and Development (OECD) - the international body recognised for setting norms and standards on tax cooperation at the international level.

The Council noted that the ACP countries blacklisted are mostly small, developing states with vulnerable economies, which will suffer further negative economic impact and extensive reputational damage from the EU’s unilateral actions, which go against the spirit of partnership enshrined in the ACP-EU Cotonou Agreement and undermines the trust and confidence leading up to Post-2020 negotiations. The Council demanded that the EU enter into dialogue with the ACP to resolve this matter.

Sale of African migrants in Libya

In a strongly worded declaration, the ACP Council of Ministers unanimously condemned the inhumane auctioning of migrants in Libya, which has been documented in the media. Denouncing these actions as “despicable acts of slavery” amounting to crimes against humanity, the Council called on the cooperating development partners to take a holistic and development approach in addressing the challenges of migration, including effective means of countering human trafficking and smuggling of migrants.

The Council commended the Libyan authorities for their immediate response in investigating these heinous acts, as well as the swift engagement of the African Union. The Council of Ministers requested the Government of Libya to provide all necessary assistance to ensure the full respect of the rights of migrants and refugees.

The Council of Ministers adopted resolutions in full support of the territorial integrity and sovereignty of ACP member states, urging just and peaceful resolutions of territorial disputes between Guyana and Venezuela, as well as Belize and Guatemala. The Council also expressed its full support and solidarity with Cuba in its fight against the economic, commercial and financial blockade and extra-territorial measures imposed by the United States.

Several decisions were taken on trade, including a commitment to enhance intra-ACP trade and economic relations by setting up an ACP-wide trade information portal for ACP individuals and businesses in search of information on manufactured products, commodities, services, investment opportunities and best practices. Ministers also endorsed an incremental approach to intra-ACP trade, targeting areas that could being immediate benefits such as dealing with non-tariff measures and trade facilitation.

To tackle non-tariff measures set by the EU that impede, the Council of Ministers mandated the establishment of a new programme to support ACP states to cope with the myriad of SPS (Sanitary & Phyto-Sanitary), TBT (Technical Barriers to Trade) and other challenges related to exporting to the EU market.

The Council of Ministers also passed a resolution welcoming progress towards the implementation of the ACP’s “New Approach” to commodities, which focuses on transforming ACP commodities by enabling integration into regional and global value chains. The Council urged the expeditious completion of a new programme on value chains that will provide support to sectors such as cotton, sugar, banana, cocoa, kava, fisheries and rum.

Looking towards trade with the European Union after the current ACP-EU Partnership Agreement expires in 2020, the Council of Ministers welcomed the EU’s assurance that trade and development cooperation will continue to play a key role in future relations, including Aid for Trade. The Council acknowledged that the cornerstone of future ACP-EU trade relations will likely be the reciprocal but asymmetric Economic Partnership Agreements (EPAs), for export growth and diversification. However, ministers underscored the need for the future partnership framework to allow discourse on cross-cutting issues under EPAs as well as bilateral and multilateral trade.

The Council of Ministers approved the budget of the ACP Secretariat, to the tune of €15,798,678 for the 2018 financial year. A revised scale of contributions for ACP Member States was also approved, with effect from 1 January 2019.

Brussels, 5 May 2017/ ACP: The Council of Ministers of the African, Caribbean and Pacific Group of States closed its 105th session with two key decisions that will influence how the bloc of 79 countries will carve out a more effective role in the international arena.

Within the framework of the 105th Council of Ministers of the African, Caribbean and Pacific Group that held on its first day of discussions in Brussels, Belgium on Tuesday the 2nd of May 2017, Cameroon's Minister of Economy, Louis Paul Motaze chaired the talks. He was assisted by the Ambassador of Cameroon, Daniel Evina Abe’e in his capacity as

“We are just returning from Cameroon where we trained a group in the Southwest region that had downloaded our material on the ‘biochar system’ from the internet and invited then us to help them launch it”, says Professor Alessandro Peressotti. He was speaking at the Brussels-based Press Club Brussels Europe on the 8th of July 2016, sponsored by the ACP in collaboration with the European Union.

We, Ministers of the African, Caribbean and Pacific (ACP) Group of States responsible for trade matters, meeting in Brussels from  19 to 21 October 2015 to, among other things, review preparations for the Tenth WTO Ministerial Conference (MC10) in Nairobi and provide political guidance  to our Member States; 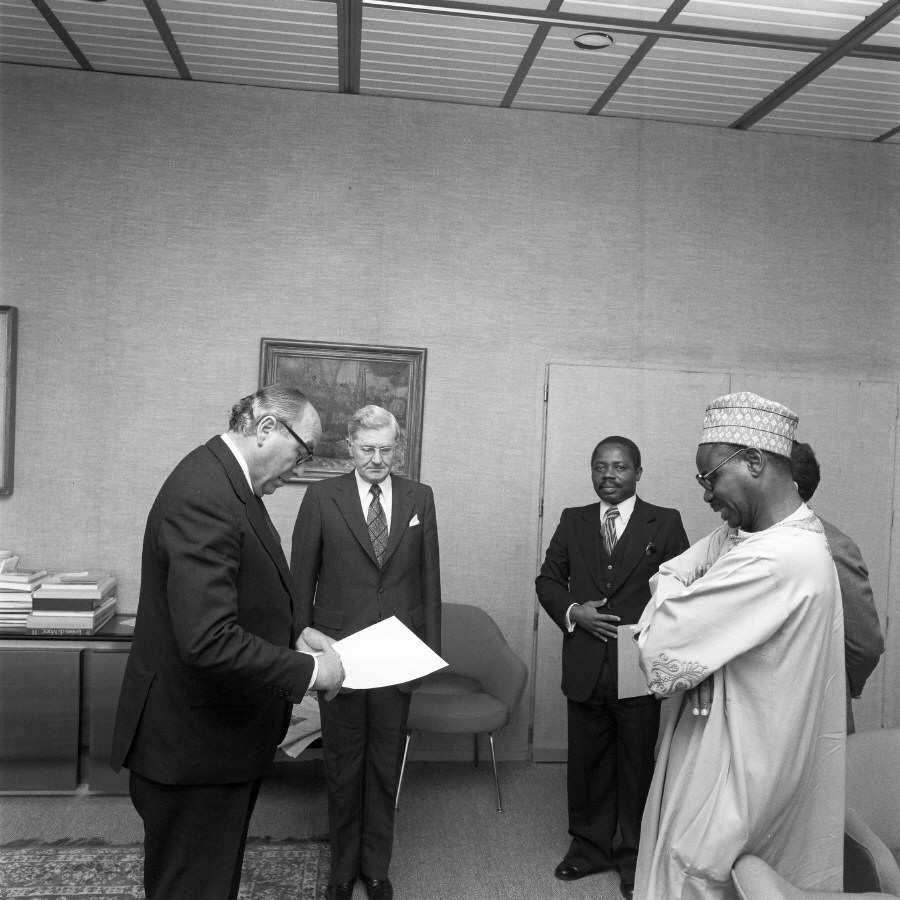